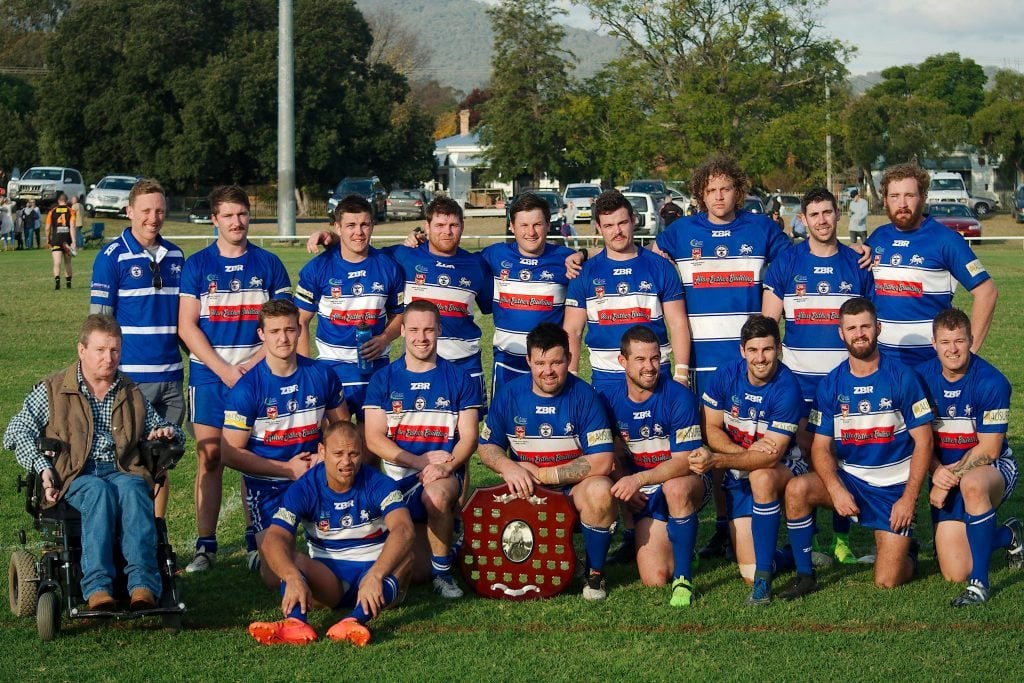 Last Sunday saw the Scone Thoroughbreds and Aberdeen Tigers compete for the Annual Johnny Lawler Memorial Shield. The game was traditionally tough as all local derbies are. In a match where both sides had too many errors it was Scone converting a 6:4 lead to a 24:8 victory at full time.

Aberdeen finally scored after seeing several prior opportunites turned down including penalties and stepping on the side line. The Tigers were pressing the line after 20 and Andrew Nicholls crossed for his first try in the corner and a 4:0 lead. It was Captain Wes Suckley who barged over for the Thoroughbreds with five minutes to go in the half, and a Sam Taylor conversion providing a narrow margin when the siren blew.

It was more of the same in the second half – with both sides trying to dominate. Around the 20th minute, a high shot on a Scone’s Kyle Cochrane saw a penalty to the Thoroughbreds, however Cochrane was sent to the bin for 10 after he retaliated. Shortly after, Tim Smith stole the ball in a tackle and ran 50m for Scone’s lead to increase to 12:4 following another Taylor conversion. Aberdeen weren’t going anywhere however and were next to put points on the board when a rushing defence was caught out and Nicholls crossed for his second. The conversion missed and the score was 12:8 with 15 minutes to go.

Aberdeen were denied a try when their winger touched the side line just before scoring, and it was up to Sam Taylor to pounce a loose ball and run the best part of 80m to give the Thoroughbreds some breathing space. Taylor converted his try for a 18:8 lead with five to go. Tim Smith brought up his double shortly before the final bell, finishing off a nice backline movement. Taylor’s conversion provided the final scoreline of 24:8.

Captain Coach Wes Suckley was pleased with the result but acknowledged the high mistake rate “we need to concentrate on cutting down the silly errors and controlling the match better. Very happy with the win – especially for Scone to retain the Johnny Lawler Memorial Shield”

President Kyle Warren recognised the contribution that Johnny Lawler had made to both Clubs and congratulated both teams on their efforts. Life Member for Scone, Phil Eveleigh participated in the short presentation after the game.

The Reserve Grade game was between Scone and Murrurundi. In what was the pattern for the whole day, both teams were quite even after the first half – Scone led 10:6 following tries to Jarrod Austin after 25 minutes and Chris Brennan in the final ten. Murrurundi crossed before half time with Shannon Brooks finding the line from dummy half and Mitch Rando converting.

James Carrascaolo had a strong run leading up to his try, five minutes after the second half kick off. Murrurundi however piled on the pressure, helped by Scone errors and were rewarded with a try, with 20 to go. Conversion was unsuccessful, and it was Tom Vincent who was next to charge over for Scone. Josh Noble added the extras. An error from the kickoff was all that Murrurundi needed to get another four pointer soon after. There was no conversion and the final ten minutes was a torrid affair with no team able to get the advantage. Final score, 20:14 to Scone.

The young Thoroughbreds looked like they were well in their game against Singleton with only one try being the difference at half time. Singleton found the line in the last ten minutes and at 4:0 the stage was set for a good second half.

Unfortunately, the Thoroughbreds simply could not maintain their defensive efforts of the first half and found themselves down by 14:0 after ten minutes. A Scone indiscretion saw the side reduced to 12 for ten minutes and Singleton capitalised with another three tries during this period. It was a disappointing final score of 32:0 which did not reflect the efforts of the lads.

The Ladies League Tag team took on Murrurundi and expected to be in for a very tough match. The Mavettes crossed twice within the first ten minutes and looked like it could be a long day for the very young team. The girls were not to be denied however and a try to Lilly Golledge was just the tonic they needed. A terrific conversion by Sam Elphick narrowed the score to 6:8 and a subsequent try to Hailey Hillsley on the wing gave the Thoroughbreds an unexpected but deserved lead of 10:8 at the break.

Murrurundi to their credit maintained the pressure in the second half and their experience was showing. Combined with some missed tags, they managed to cross for three tries in the second half, while Scone did not add to their score line. A final score of 22:10 was a fair reflection of the game however the young team received plenty of support from the appreciative home crowd.